It’s time to SPEAK OUT!

April is National Sexual Abuse and Child Abuse Awareness Month. Join SHEEC as we present a powerful Spoken Word Showcase that brings these issues out into the open. Only the abusers value our silence and isolation, so now it is time to BREAK the SILENCE around child and sexual abuse.

On Thursday, April 12th at 8pm in List 120 (64 College Street), a group of powerful poets will be sharing their stories with you, with open arms to Male Survivors as patrons and poets.  The goal is to keep the dialogue open, keep telling our stories, and enCOURAGE others to tell theirs.

Society has made victims and survivors feel “dirty”, “ashamed”, “embarrassed” and “afraid” of the abuse they have endured. Let’s promote support for survivors! Talking about the abuse will help remove the stigma attached to it for the victims. It’s time to take away the power of the abusers and put it in the hands, minds and hearts of the survivors!

April is just the beginning!

The event will take place on THURSDAY, APRIL 12th at 8 pm in LIST 120 (64 College Street). You will leave the show entertained, enlightened, encouraged, empowered, and informed. This is NOT an event you want to miss!

The event is FREE, but donations are *encouraged*. These will go toward Sojourner House, a local domestic violence agency that was founded by Brown students 35 years ago!

Alternatively titled: “A Response to Cate Stewart and Lisa Lansio”
and originally posted here by Aida.
For those of you who don’t know, I’m one of the two co-leaders of SHEEC this year–a group with which I’ve been heavily involved since its inception in 2008/2009. I was at a conference in Colorado this week and sadly had to miss 3 of our events, including a showcase/open-mic in honor of Wear Purple Day/Spirit Day and Love Your Body Day that would benefit Sojourner House, a local domestic violence agency founded by Brown students in 1976. The Showcase featured 2 local poets, the Gendo Taiko (Japanese drumming) crew, Attitude (a dance troupe), as well as a few other performers (of the singing/acoustic-guitar variety).
After a set of great performances, the last two individuals who signed up for the open-mic portion took the stage and began to attack the event and the people who were in it, saying that having a campus pole-dancing troupe perform was “not respectful” and that “it just perpetuated gender roles and objectified women.” One said that “she came here expecting to be empowered, but that’s not what happened for her at all” and that we “need to stop singing about gendered things” (and I believe the example was getting kissed in parking lots? Which…what?).
The other added that “women need to stop playing the victimized role, stop blaming men for our problems, women bring it upon themselves” and that “women have the power just as much as men and are as much to blame for abuse as men, that women are not chained to the floor and can just walk away from abusive situations.” That same one mentioned some of the performers who talked about abuse or abused women and their mindsets have no right to speak issues that they were not physically a part of (which is actually inaccurate, but I’ll get to that later).
This is my response, not only as SHEEC’s Co-Chair,  but as an individual:
First of all, the controversial pole-dancing performance. I’m tired of defending and explaining this one, so I’ll keep it short and sweet. Empowering women doesn’t mean desexualizing them. Objectification is only a problem if it’s not paired with due subjectification (read this post as well as the comments). Finally, we support a group of educated women who want to “stretch the boundaries of pole dancing as something far more than simply sexy,” who “want to create a place where people feel comfortable, athletic, and yes, sexy!” and who “consistently challenge the stereotypes that surround vertical dancing, and seek to bring together a wide range of art forms through experimentation and openness in [their] performances.”
We wanted to showcase individuals who would address the core of our event, who would speak to their relationships with their bodies via song/dance/poetry and would show us a bit of themselves through their art. This event wasn’t meant to empower every person, but provide a space so people could share what empowered them and talk about what didn’t. Sorry, Cate and Lisa, if this didn’t empower you personally, but that’s not what the event was for. We wanted to start the conversation and show the varied emotions people had regarding their bodies, trying to focus on the positive, but also trying to highlight the complexity and (thus billing it as something “silly and serious and complex” in our advertising).
Now, what I consider the most egregious part of this evening (again, from what I’ve been told) was the commentary around abuse and the power women do or don’t have.
I commend Jenn, Chay, Linh, and the other SHEEC planners that were there and handled this as gracefully as they could given the circumstances. Thank you for positively representing SHEEC and doing damage-control, for letting those two girls know that you respected their right to have an opinion and their desire to share it, but that they did not have to attack other performers to express them. I also want to thank the performers for weathering that storm and for reaching out to us after the event with very touching emails.

Having a conversation or constructive dialogue is not the same as being argumentative and rude. Debating a point is not the same as attacking a group of people and not listening to their defense. Constructive criticism is no the same as ignorant remarks made to shame others and devalue their experiences. Learn the difference, Lisa and Cate, and then try again. We’re willing to listen if you are.

SHEEC is a group that was made to address issues of gender, sex, sexuality, and all the things that go along with it. This means we aren’t going to shy away from difficult conversations, controversy, and tackling the taboos. In fact, it means we’re more likely to address them because we come from a place that sees addressing those topics as a PRESSING NEED instead of as something to be avoided. We want to make people feel challenged and productively uncomfortable while also nourishing those who need it and providing support for folks marginalized due to their sexuality or desires. If you are looking for a “safe” group that doesn’t push envelopes, this is not it.

Overall the night was a great success. Thank you to the wonderful performers that shared their stories and many talents. They should be respected and admired for their courage and strength. It’s important to UNDERSTAND and REMEMBER that Love Your Body Day and Wear Purple Day in support of domestic violence awareness are about ACCEPTANCE and LOVE. Thanks to everyone who came out tonight for your support! 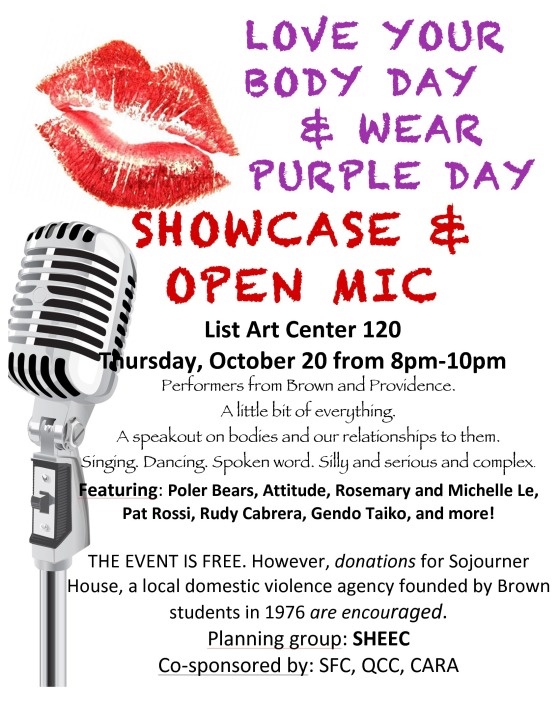